One might think going to New York City (NYC) in the middle of winter for a weekend would not be ideal but to the contrary, it’s a great time to go to NYC for a fun weekend.  Here is why I would recommend going in the winter:

My best memory of being in NYC was in 2000 shortly after Christmas and a heavy snowstorm dumped about a foot of snow on the city.  The city came to a bit of a standstill with less traffic and everyone was out in the streets walking through the snow.  Central Park was a winter wonderland.

I’ve been to NYC many times and used to live across the Hudson River in Hoboken, NJ so I’ve seen a lot of NYC.  The way I approach a visit is to have a rough idea of some things I want to do and pick a couple of neighborhoods to get lost and explore.  For this trip, I wanted to go to the observation deck of One World Trade Center, see a Broadway show, attend the Andrea Bocelli concert at Lincoln Center (reason for visiting).  I decided to explore the neighborhoods of Brooklyn, Tribeca, and NoHo.  There are so many neighborhoods to explore and so much to experience.

Getting to NYC via AirTrain

There are many airport options when flying to the NYC metro area – Newark, La Guardia, and JFK airports are the most popular.  The most convenient airport is La Guardia due to proximity to the city and a short taxi ride (depends on the traffic).  I typically do fly into LaGuardia but I chose to fly into Newark airport this time and take the AirTrain into the city.

Upon arrival to Newark airport, it’s easy to find the AirTrain by following the signs to the airport monorail system.  You have a choice to buy your AirTrain ticket at the NJ Transit ticket machine prior to getting on the monorail or at the AirTrain station (last stop on the monorail).  The line can be long to get your ticket at the airport.  If it is, get your ticket at the AirTrain station.  There was no one in line there.  The AirTrain takes you from Newark airport to a connecting NJ Transit train station where you will board a NJ Transit train to NY Penn Station.  Please take note that there is also a NJ Penn Station which is on the same route but don’t get off the train until the last stop at NY Penn Station.  One way fare to NY Penn Station is $13 and will take about 30 to 40 minutes.  Travel tip:  Consider buying a roundtrip ticket to avoid having to wait in line at NY Penn for the return trip.

Certainly there are other options to get to NYC from Newark via taxi or Uber.  This can be pricey as fares jump when you cross state lines… expect to pay $50+ each way.  If your party is 3 or more, it may make better sense to use a taxi or Uber, especially with luggage.

When you do arrive at NY Penn Station, be sure to have an idea of what exit you should use or what subway line to get on.  You can also catch a taxi easily from here.  There are plenty of subway maps and the machines to purchase your ticket are easy to use.  I chose to buy a 7 day unlimited subway pass for $33 so I could avoid having to reload my card.  I was in the city for 4 days and the unlimited pass was great for me… otherwise, each trip is $2.75.

Travel tip:  Download the NYC subway map onto your phone so you can view it whenever needed.

The first stop of the day was a visit to One World Trade Center.  I had visited the 9/11 Memorial before but the observation deck of the tower was not open the last time I visited.  Luckily it was a beautiful sunny day and you could see for miles.  I would recommend getting there early to avoid the long lines.  If you are active military or a veteran, you can get in the priority line which is greatly expedited and receive a discounted ticket.

The views were phenomenal and the observation deck was quite spacious and very touristy.  The only thing you can’t see at all is Central Park.  They will try to sell you many things while there but there’s no need to buy the extras.  The elevator ride up and down is quite the experience too as a history of the city is presented on the way up.  There is a restaurant on the observation level that is quite good for drinks and food but super expensive.  My cheeseburger was $26… it was a good burger at least. 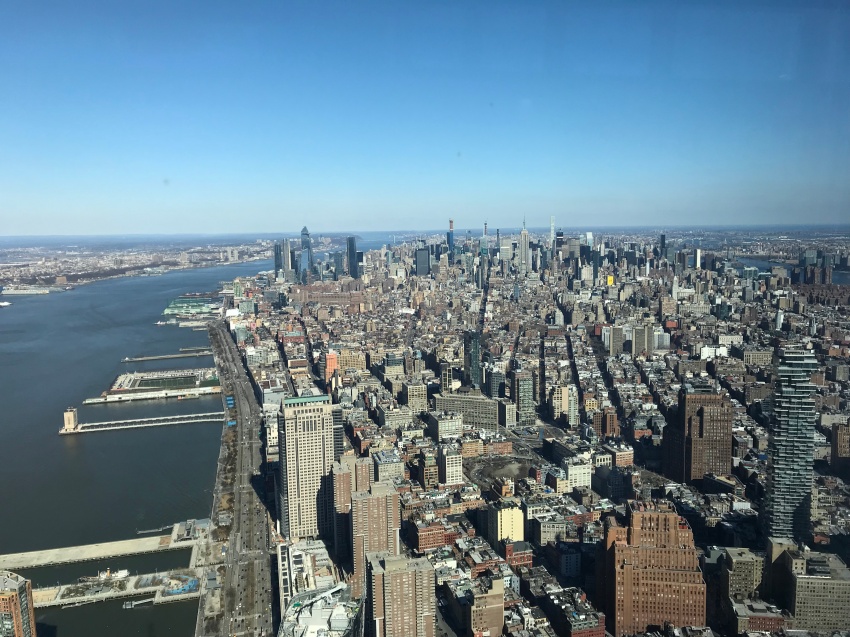 Being at the World Trade Center site is always an emotional experience for me having lived in the area on September 11, 2001.  I lived in New Jersey at the time and saw the impact the tragedy had on my friends and colleagues that lost friends and families in the terrorist attacks.  I’ll never forget watching the towers fall and my friends not knowing if their friends and family had gotten out before they fell.  The memorial pools which are the footprints of the original twin towers are powerful and always make me contemplate that day… 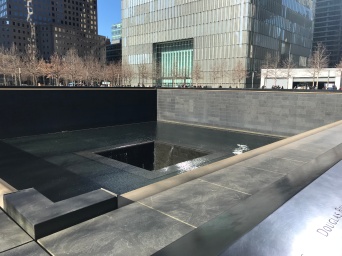 After so many visits to NYC, I still had not experienced walking across the Brooklyn Bridge using the pedestrian path that is elevated above the automobile lanes.  With such a beautiful sunny day, I decided to do it (entrance is just past City Hall).  You’ll find it can be quite crowded but most people only walk to the first set of arches and then walk back.  It’s such a beautiful bridge.  I did walk all of the way across to Brooklyn.  The walk took about 30 minutes by the time you take pictures and traverse through the crowds. 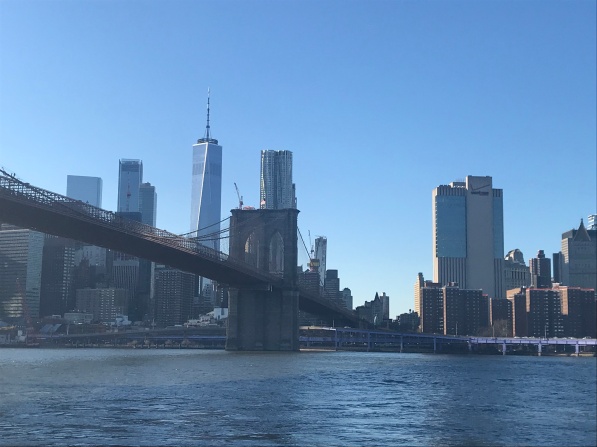 Once you arrive on the Brooklyn side of the bridge, you’ll have two options to exit the bridge… I decided to take the left exit which went down stairs and dumped me out onto Water Street.  I took a right on Water Street and made my way to Camden Plaza which is a nice park to walk through on my way to historical Montague Street.  I love architecture and the architecture in Brooklyn did not disappoint.  The sunlight really showed off each building’s features.  It was amazingly quiet in Brooklyn… no sirens, no honking… I dare say it was calm.  That is not the case in Manhattan any time of the day.  Montague Street is quite historical and full of shops and restaurants.  Take the time to stroll and explore this historical area. 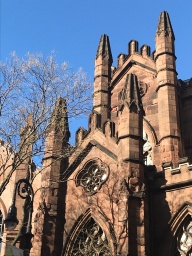 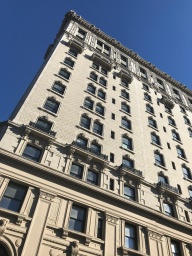 As you walk down Montague Street, it eventually ends at the Brooklyn Promenade which offers spectacular views of Manhattan’s skyline and the Brooklyn Bridge.  This is a popular place in the evening to see the skyline at night. 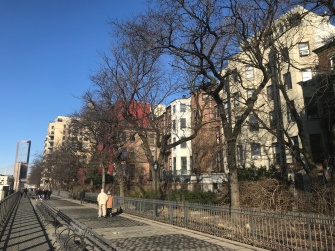 After a nice afternoon of exploring Brooklyn, I walked to the nearest subway station and headed back to Midtown.

Even though I was in NYC with family to see the Bocelli concert, I opted to do my own thing one evening and went to see The Cher Show on Broadway.  I had not purchased tickets ahead of time which can be a bit risky but when you’re looking for a single ticket, it can be much easier to snag a great ticket.  Luckily there were quite a few single tickets left and I scored row G center orchestra.  Broadway shows can be quite affordable to quite expensive so don’t let the price scare you away.  I would definitely recommend seeing The Cher Show.  This is a new show having just opened in Fall 2018. 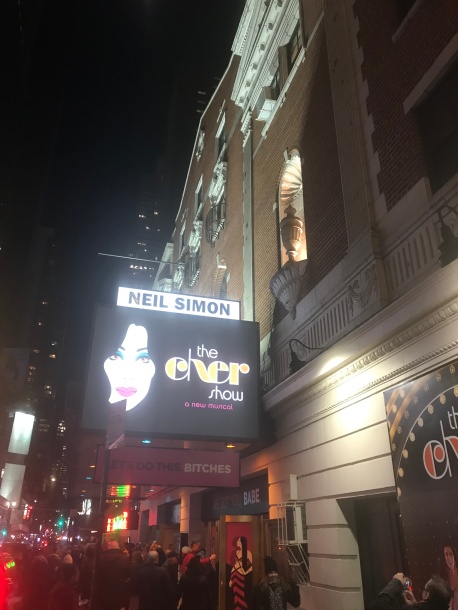 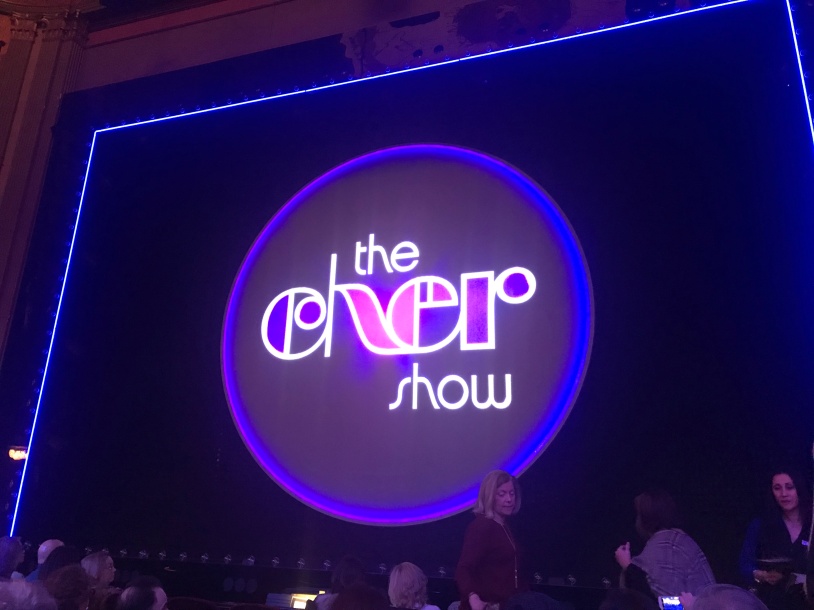 One of my favorite things to do when visiting NYC is picking a neighborhood and just wander around and look up at the historic building facades or new buildings built.  Tribeca is an acronym for Triangle Below Canal Street as the neighborhood is bounded by Canal Street, Chambers Street, West Street, and Broadway which actually makes it a trapezoid.  Tribeca is home to the Film Festival and many celebrities call it home as well.

I had come to Tribeca to meet a former work colleague when I worked in the area in the early 2000’s.  We had a delightful brunch at The Odeon and caught up on close to 15 years of life since we last seen each other.  Weekend brunch is definitely a thing “to do” in NYC no matter what neighborhood you’re in.  Brunch can be pricey.

Below is an assortment of building facades that really struck me with their intricate detail and classic style.  Amongst all of these historical buildings was a new residential building that stands tall in the neighborhood.  See a picture of Tribeca from above from One World Trade Center. 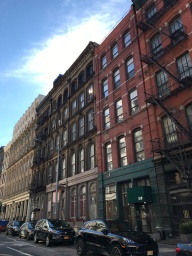 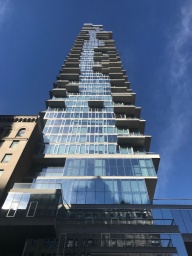 Going to the Metropolitan Opera

After an afternoon of exploring Tribeca and catching up with my friend over brunch, I headed back to my hotel to get ready for the Andrea Bocelli concert at the Metropolitan Opera House at Lincoln Center.  I had always wanted to attend a performance at this venue and once I saw that Andrea Bocelli would be performing there, I purchased tickets well in advance as the venue is no where the size of an arena where he normally performs and tickets were likely to sell out.

Travel tip:  You can wear almost anything to most Broadway shows in NYC but I would recommend dressing up when you go to the Metropolitan Opera.  There were many couples in tuxedos and evening gowns so you would definitely stick out if you came in jeans.

No pictures or video were allowed during the concert as one might expect.  Andrea Bocelli and his many guest opera singers were fabulous and I really enjoyed the overall experience at the Metropolitan Opera.  Afterwards, we headed over to The Smith restaurant which serves a variety of great food at reasonable prices in an upscale casual environment (they even provide refills on soft drinks).  Be sure to make reservations. 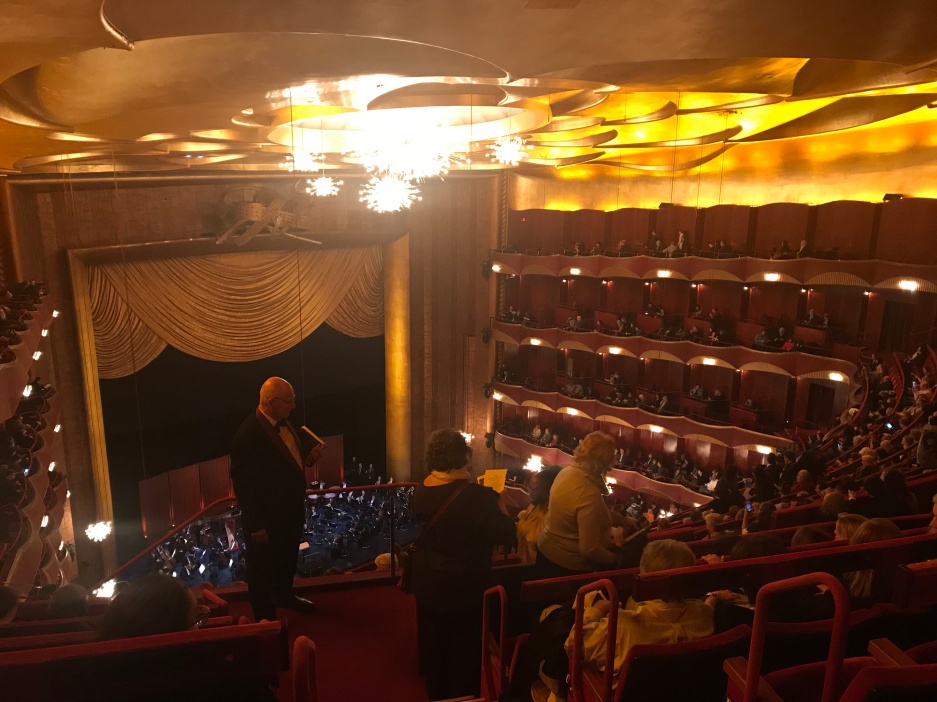 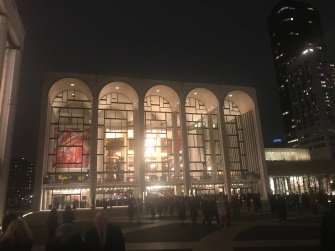 Getting back to Newark Airport

If you take the AirTrain back to Newark Airport (which I’d recommend as the Uber app said it would cost me about $65 to get back), here are some tips to take the stress out of it:

The above may sound complicated but it’s really not.  NY Penn can be stressful but just allow plenty of time and there are plenty of people around to help you.

If you’ve ever wanted to go to NYC and thought it was just too expensive or too crowded for you, perhaps winter is the right time to go.  Flights and hotels are much cheaper and the crowds are much smaller.  The weather can be mild or snowy and cold but you can’t go wrong with a NYC experience despite the weather… if it’s rainy, visit some museums.  You can choose to be in crowded areas or not (Times Square is always crowded unless you go early morning).  NYC is so much more than Times Square and Rockefeller Center… take the opportunity and live like a New Yorker by taking the subway and hanging out in the different neighborhoods.  Although I didn’t go to Central Park this time, it is my favorite place in the city.  The park is expansive and such a refuge from the hustle and bustle of the city.