Uganda – The Pearl of Africa

Why travel to Uganda?

When I share with people that I am traveling to Uganda, most people can think of many other places to go before Uganda or don’t understand why I would want to travel to Uganda.  I will admit Uganda was never at the top of my list but I’m willing to go anywhere in the world that has no current civil war going on or US safety restrictions on it.  With my recent travels to visit each continent while taking time off from work, I needed to determine a place in Africa to visit that would be a different experience than my prior visit to southern Africa in 2015 (South Africa, Zimbabwe, Botswana).  Uganda did not disappoint!

Luckily Gate 1 Travel had a Discovery Tour for small groups to explore Uganda.  I would not recommend going to Uganda on your own.  The roads can be quite treacherous and most are not paved or marked.  There were no personal safety concerns.  I traveled with my sister Robin.  Photo credits to her on a lot of the people photos below. 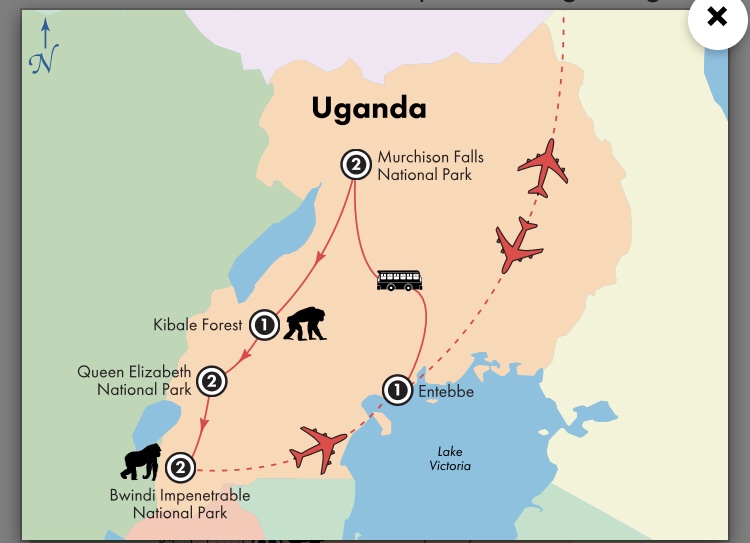 Uganda is called the Pearl of Africa due to Churchill’s reference to its geographical location in the Great Lakes area of Africa and Murchison Falls on the Nile River.  Uganda is plush with mountains, rivers, many lakes, and fertile soil.  It’s an absolutely beautiful country.  Lake Victoria is the second largest lake in the world (Lake Superior is the largest).

Uganda is also home to many national parks with elephants, hippos, giraffes, antelope, cape buffalo, numerous bird species.  The reason most people visit is for the opportunity to trek gorillas and chimpanzees in their natural habitat.  Seeing the gorillas and chimpanzees is what drew me to Uganda (later blogs to come).  After spending 9 days in Uganda, it was the people of Uganda that made the biggest impact on me.

The people are hardworking, beautiful, and resourceful.  Their way of life is very foreign to Americans as many people live in what we would call poverty but that’s our view on it.  Being on a tour, I was able to ask my guide many questions about the way of life in Uganda.  Here are my key takeaways:

These animals are also important for when it comes to a man marrying a woman.  In Uganda, the man provides a dowry to the woman’s family in the form of cows and goats and will vary based on the eduction level of the woman.  A typical dowry could be 10 cows. 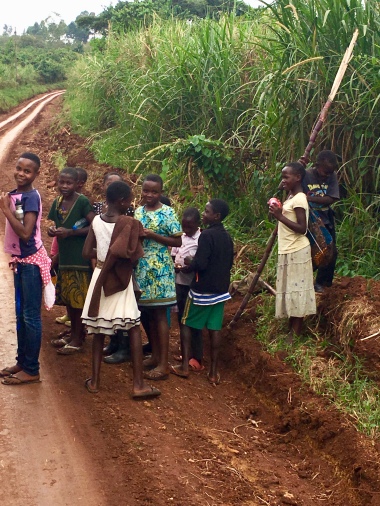 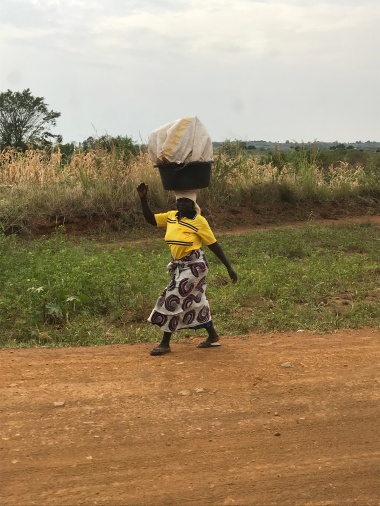 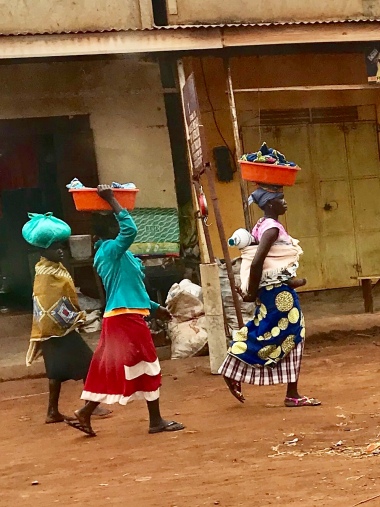 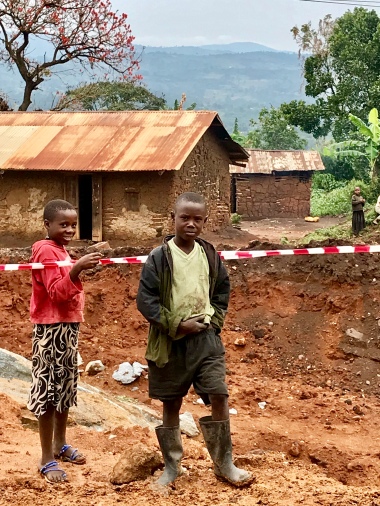 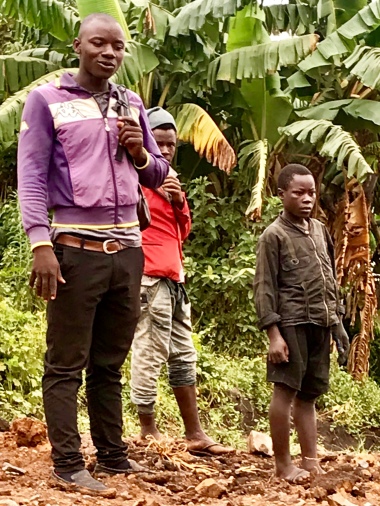 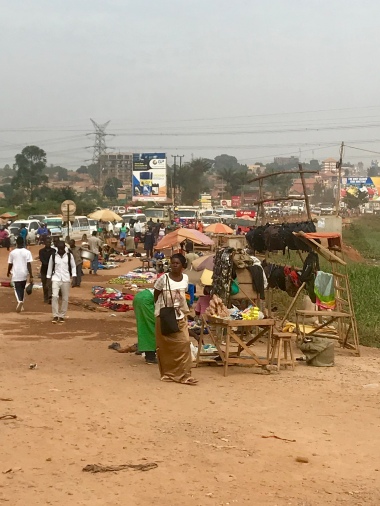 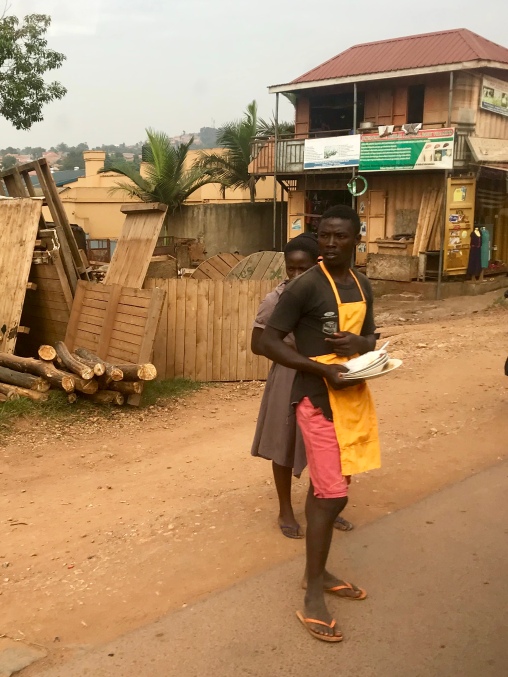 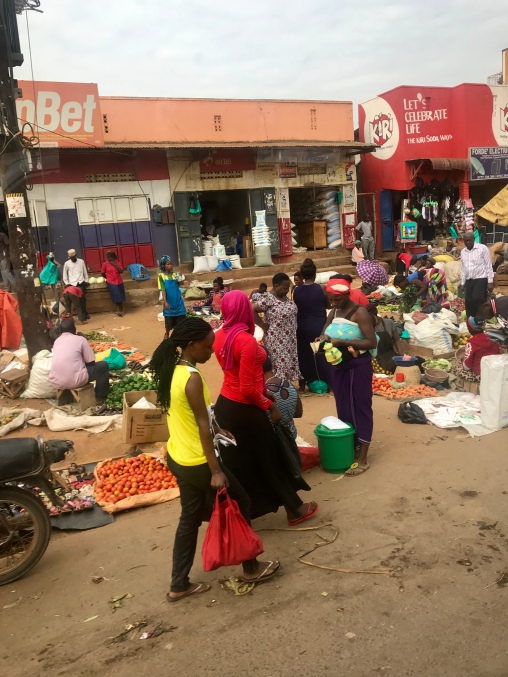 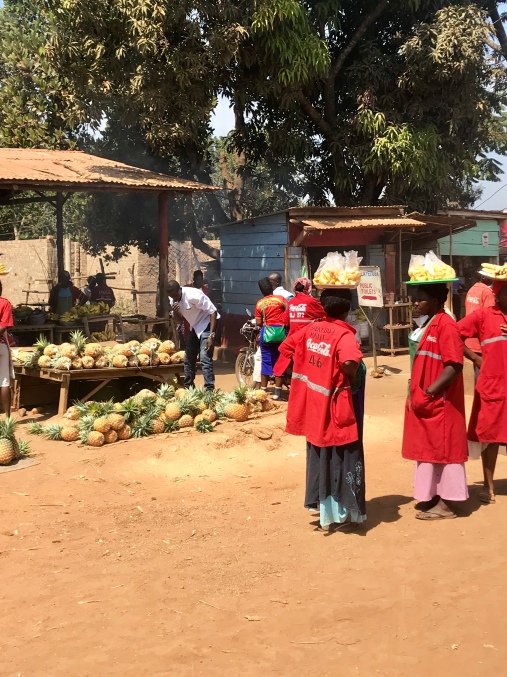 The little boy in front of the cows is leading the cows, not running away.

Once you get outside of the cities, the average homestead of a family included a shelter made of mud bricks or timber with a dirt floor.  Families slept on woven mats.  These shelters were just that “shelter”.  Most of these shelters were no bigger than an average American’s living room and the families took great pride in keeping their home clean, evidenced by the sweeping of the dirt area around the home.  It was surprising to see where people lived.  The home below is actually on our hike to see the gorillas which was not even close to a major road with the water supply further down the mountain in a river. 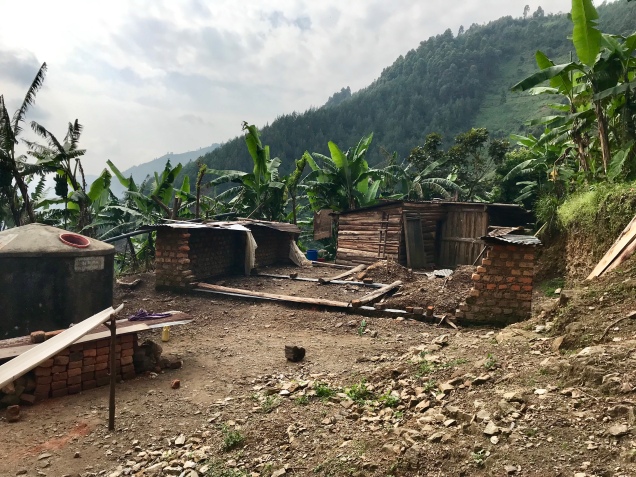 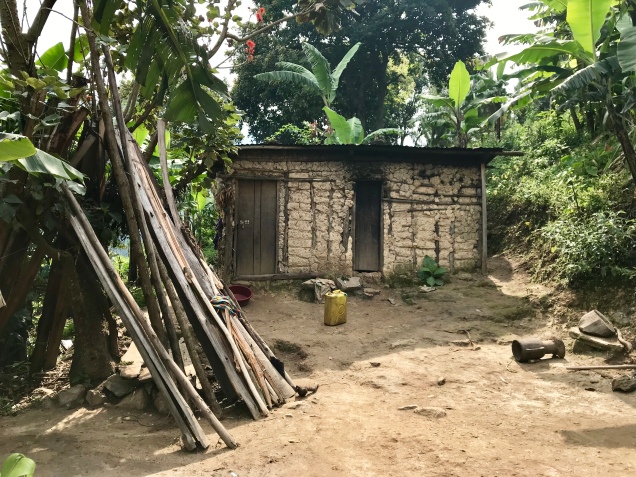 Even though we may say these living conditions are uninhabitable, this is the way of life of many Ugandans and has been tradition for centuries.  It was a very humbling experience and made it very hard to ever complain about any discomfort along the trip (although I still did… no air conditioning).  I asked our guide whether the people felt like they were struggling or poor and he indicated this is just the way of life and the people don’t know any other way.  Seeing this everyday was hard to take in but the people did not seem unhappy or seem to be struggling as everyone had plenty of food, shelter, and water resources which are the basic necessities of life.  Our guide indicated the government does not provide any type of assistance to its people such as food or housing allowances as everyone has the basic necessities.  I need to do more research and educate myself to see how I can give back in a meaningful way.

The highlight of everyday was seeing the children greet us everywhere we went in our vehicles.  The children have become accustomed to knowing that safari type vehicles (we had two Land Cruisers for our group) carried white people or foreigners they called Mzungu.  The children would hurry out to the roadside waving with excitement and saying “hello Mzungu, how are you?”  It was very odd at first and we didn’t quite understand what was going on.  Our guide indicated this was typical as children did not often see white people or foreigners.  We would all wave back and you could see the excitement in their faces as we waved back. 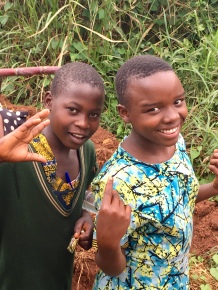 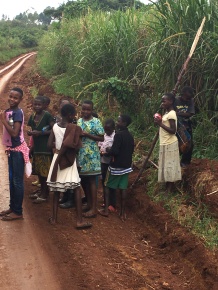 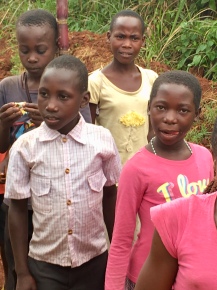 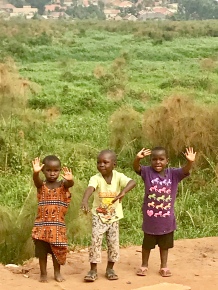 I went to Uganda to see the gorillas and chimpanzees but it was the people of Uganda that had the biggest impact on my experience in a positive way.  The people are the real pearl of this country.  I cannot overstate the friendliness and hospitality of the Ugandan people.  They are truly resourceful people.

We experienced it right away on our first day there when we ventured out on our own in Entebbe and met Isaiah who became our local guide for the afternoon.  Not only does Isaiah know Entebbe and the botanical gardens well, but we learned that he is a great golfer and a university student studying business administration.  He also has his own bike company called iRideUG if you want to explore on bike.  Here is a link to his Facebook page.  He can also be reached at walkentebbe@gmail.com. 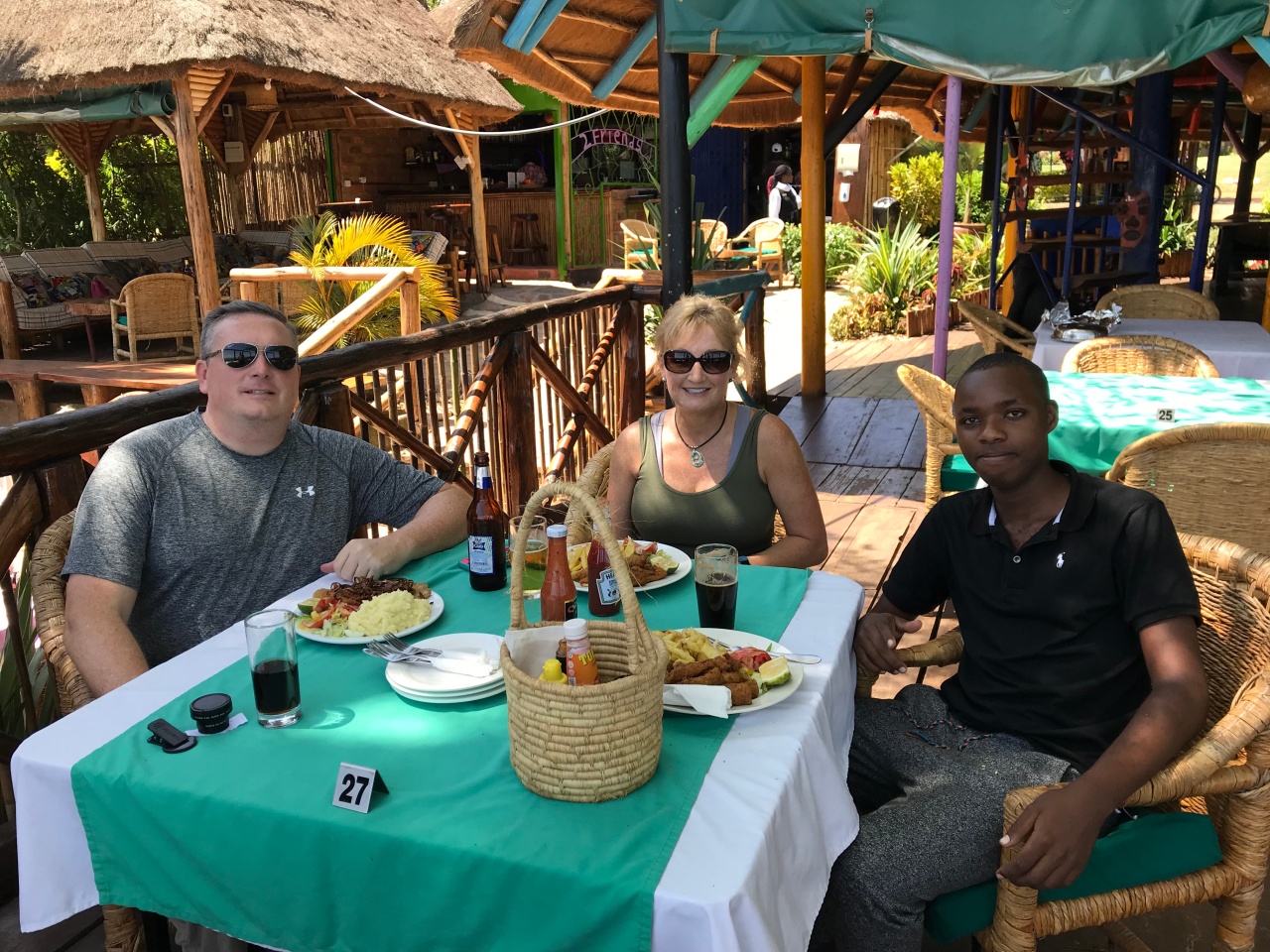 Uganda may be a third world country today but it has a promising future.  There is a lot of progress already going on with partnerships with other countries, mainly China, and the discovery of oil.  Throughout the country, there are major roadway projects going on to build new roadways by China that will help facilitate the movement of oil but also will allow the expansion of other business.  Uganda has all of the necessary resources to be a more productive economy.

It’ll be interesting to see what Uganda will look like in five years.  I just hope the spirit of Uganda (its people) doesn’t get compromised with the progress currently occurring and that any profits from this new oil exploration is shared amongst the people to better living conditions, provide more employment opportunities and free education to its people.

Leave a Reply to My Afro My Life Ug. Cancel reply