Today I decided to join an excursion tour to Lantau Island as it covered a lot in short period of time and it’s not the easiest to traverse around Lantau Island.  For $135 USD, I was able to view the South China Sea, experience a fishing village, visit the Big Buddha, and experience the Nunnery.  Although Lantau Island sounds remote, both the international airport and Disneyland are located on the side of the island closest to Hong Kong proper and can be accessed via a long bridge.

After being picked up and whisked away to the Central Pier on Hong Kong Island, I was able to take a few pictures along the waterfront that I hadn’t gotten to the day prior.  It certainly seems like these ferris wheels are popping up everywhere. Should you be interested in riding the ferris wheel, it’s only $20 HKD which is about $3 USD.  I’ve never been one for ferris wheels 😊. 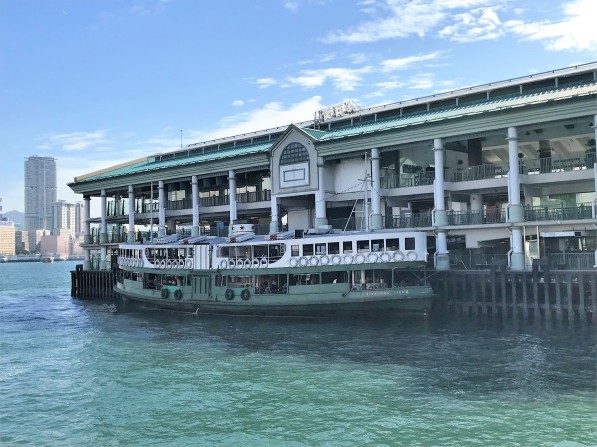 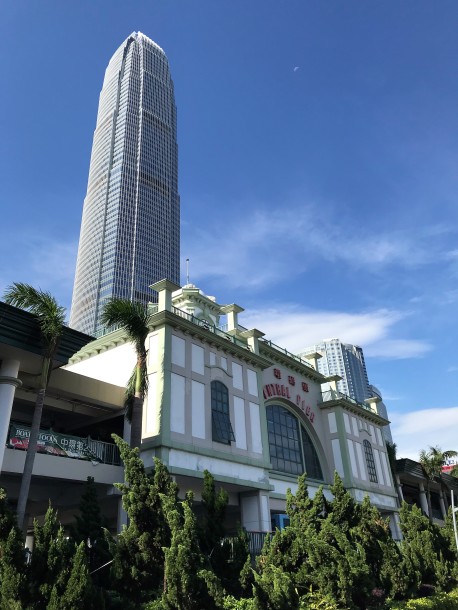 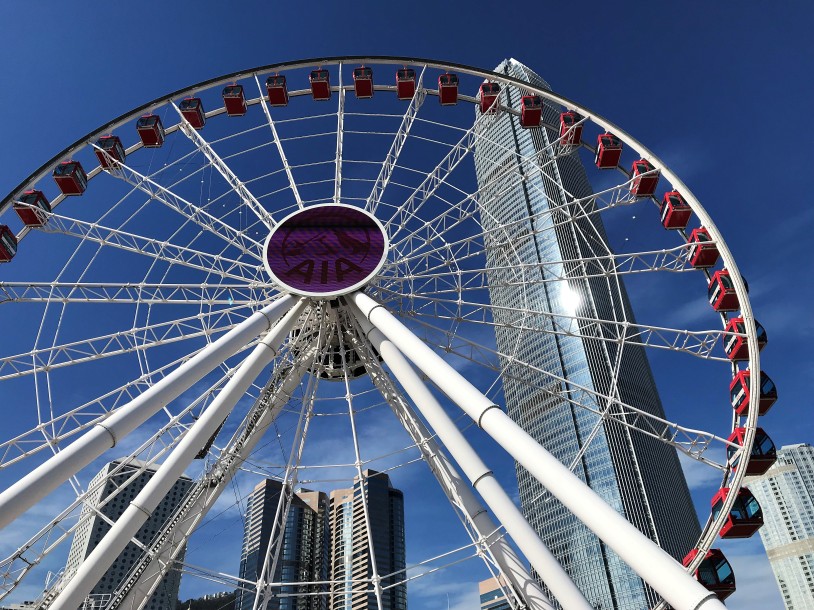 Finally we were able to board our catamaran and enjoy a 30 minute boat ride to Lantau Island where we boarded a very comfortable tour bus to see the sights.  First stop was Cheung Sha (aka Long Beach) at the South China Sea.  Lantau Island is where the Hongkongers go to escape the city and enjoy nature so there are many vacation homes and beaches to enjoy.  There had been a typhoon in the last month so the water was still pretty murky and many trees were down.  Unbeknownst to me, another typhoon was in the vicinity called Yutu but luckily I only experienced some breezy days and the typhoon passed Hong Kong. 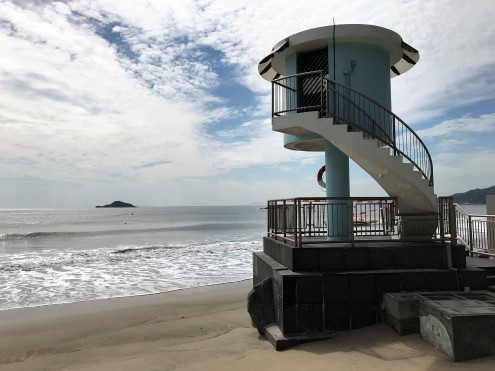 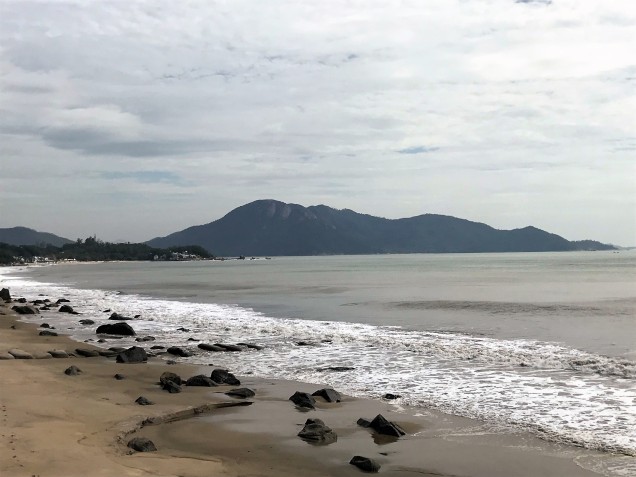 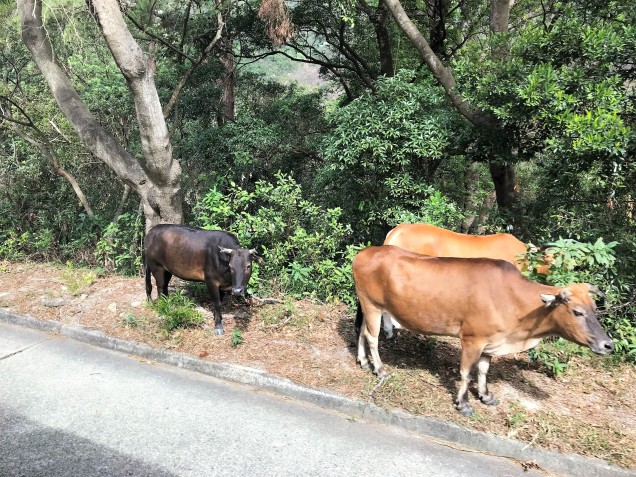 Cattle and buffalo roam freely on this side of the island.  I saw many cattle along the road but no buffalo.

We then headed over to the Tai-O fishing village which is a real working fishing village where the people have built their homes on stilts over the water.  Some (most) look a little questionable as to how long they’ll last but to each their own.  The village was very quaint and had some interesting smells of dried out fish and fresh catch of the day.  Be prepared for the smells but it’s to be expected of a fishing village.  After a short walk through the narrow streets of the village and seeing what the shopkeepers had to sell, we hopped on boat to take a closer look at the stilt homes along the river.  Although a bit touristy, it was interesting to see and I’m glad the local people are making some money off of tourism to support the community. 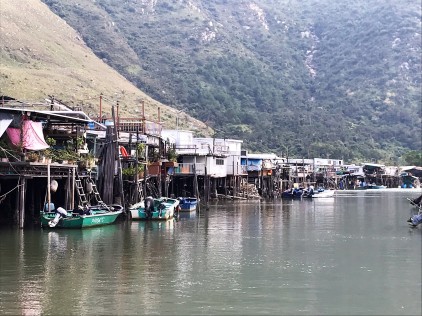 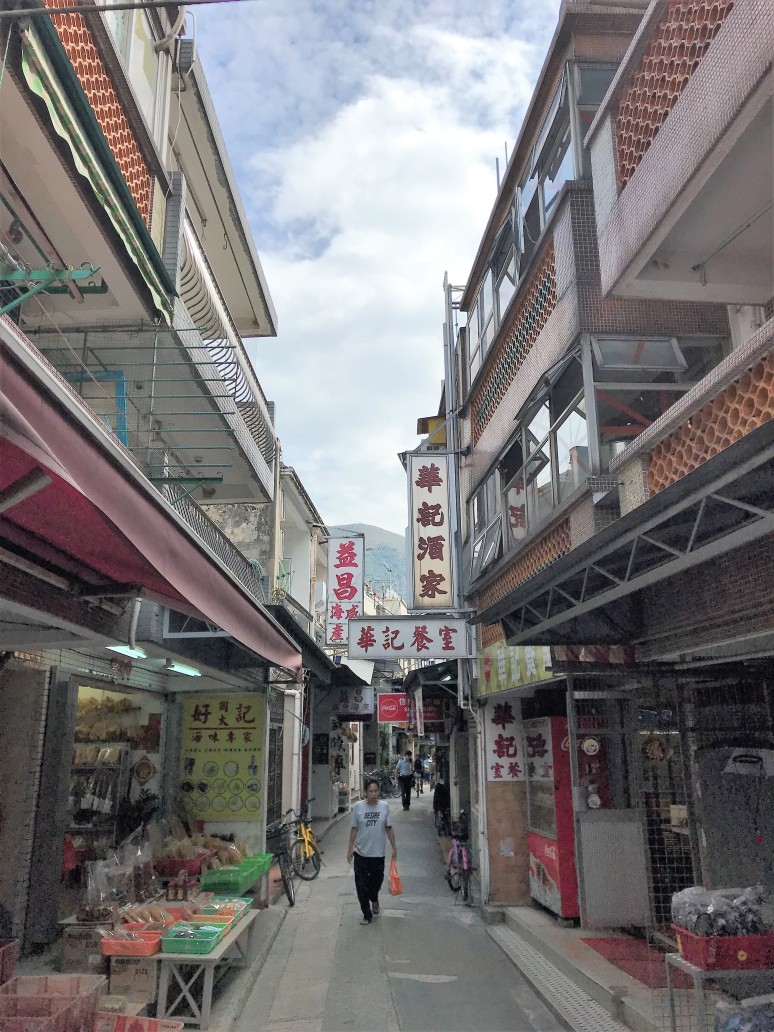 The village also has a Buddhist temple.  Notice the detail of the ridgeline on the roof.  When entering a temple, it’s important to step over the threshold and not on the threshold. 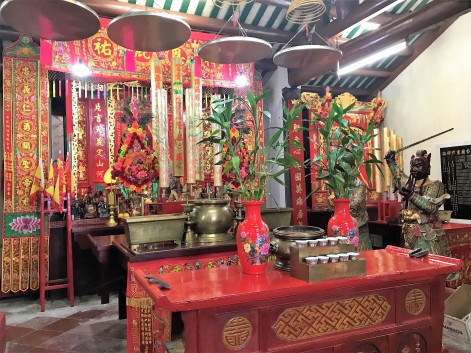 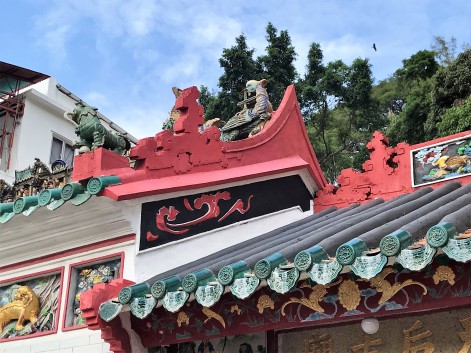 The main attraction was next… the Big Buddha.  This buddha was built in the early 90s in the area of a historic monastery.  Although historic, the area has been beautified and many of the buildings in the nunnery are newer but built in the traditional style of Buddhism temples.  This buddha is the second largest sitting buddha in the world and is over 100 feet tall and made of bronze.  Inside tells the story of Buddha and foundation of Buddhism.  It was interesting to learn about Buddhism.  Great 360 views of the monastery below and the South China Sea. 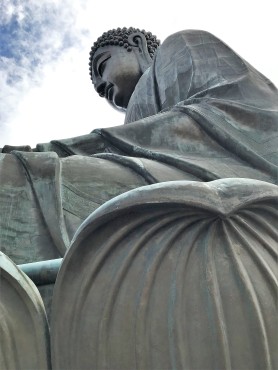 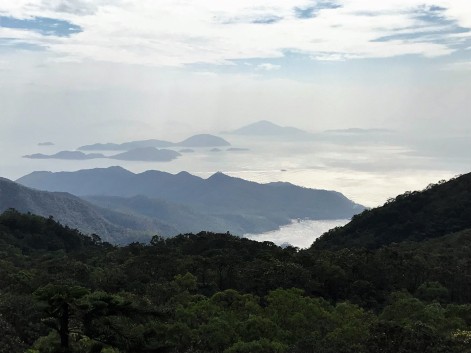 Because I was on this tour, we were able to skip climbing the steps and instead drove straight up to the Big Buddha.  Most visitors have to climb the 260ish steps up the hill to visit the Big Buddha.  After walking down from the Peak the day earlier, I was thrilled to be let off at the top.

The grounds of the monastery were impressive and were meant to impress as it’s a major tourist destination but it does deliver.  My tour group first had a traditional Chinese vegetarian lunch at the vegetarian restaurant inside the nunnery.  It was delicious.  There were about 8 main dishes served on a large lazy susan turntable on each table with green tea to drink.  We were all full after partaking in our lunch.  I definitely need to brush up on my chop stick skills though… not a pretty sight but luckily the rest of the table mates weren’t very good either.

The nunnery itself is made up of many buildings with altars inside of different forms of Buddha.  There was a strict policy of no photography of the Buddha altars so won’t see those but they were extravagant and mostly gold and large.  As it is a functioning temple, there were many worshippers there for praying.  I love the architecture of these temples… from the colors and roof lines and material used.  It’s hard to not take a good picture. 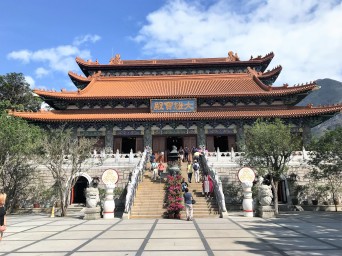 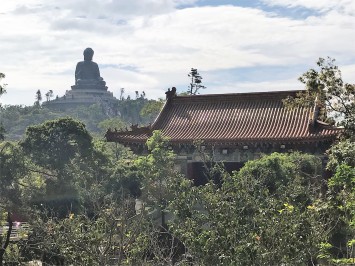 The last part of the tour included a gondola ride down the mountain before jumping on a bus back to Hong Kong; however, because of the typhoon and breezy conditions, the gondola rides had been stopped so no gondola ride for me.  It looked like it’d be a nice ride down with some spectacular scenery… perhaps next time.

Before I left home, I had checked out Calum Scott’s tour dates in the world and coincidentally he was performing in Hong Kong the same time I was there.  Calum Scott is still making his mark in the music world but some may know him from Britain’s Got Talent 2016.  My younger sister introduced me to  his music.  He has a great voice and he’s a great songwriter.  It looked like he’d be performing in a small venue which is always best and it didn’t hurt that the tickets were less than $50.  After a short break from the earlier tour to Lantau Island, I headed to Kowloon City and a shopping center called KITEC Music Zone @ E-Max via taxi.  I have to say I was thrilled to see a McDonald’s at the shopping center and had my all-day breakfast meal.  Chinese food is good but in small doses for me.

Now I needed to find this venue within the center and it was easy enough.  I must have cut in line or something because I ended up being one of the first people in the venue.  The venue was small… probably accommodated about 500 people and was standing room only… all walls and ceiling painted black with a stage upfront.  So here I am extremely close to the stage for this performance… so it was great to experience it up close but I think I prefer to be farther back.  Perhaps the artist can’t see you but it seemed like the lights were on well enough for the first few rows that Calum could have seen our faces… I wouldn’t say I’m the most excitable guy so if he saw my face, he must have been thinking why isn’t this guy excited to be here… oh well.  It was a great concert and an enjoyable experience. Here’s a clip of his performance.

All in all a very busy day and it forced me to stay up late which ultimately helped me get on the time zone so I could sleep through the night.  One more day in Hong Kong…