From Mt. Cook to Queenstown

Queenstown has a reputation for adrenaline junkie activities but on the way to Queenstown, you’ll pass through the Otago Valley which has a wealth of fruit produce and vineyards for the wine connoisseur.  I didn’t get to partake in these activities this time around but certainly plan to next time.

As you start to approach Queenstown, the scenery is spectacular with white cap rugged mountains and lakes everywhere.  The weather was phenomenal during my visit.  I again dodged any precipitation even though the forecast called for it.  Queenstown itself gets about 36 inches of rain per year versus the other side of the mountains on the coast that can get well over 9 feet of rain per year.  Many people have vacation homes in Queenstown and so the real estate is quite pricey, especially those with a view of the mountains or lakes.

In Queenstown, I stayed at the Doubletree/Hilton resort which is on the far end of Lake Wakatipu.  At first, I thought I made a big mistake booking this hotel because it is not within walking distance of the city center; however, the resort offers a complimentary bus shuttle to town and you have access to the water taxi for a nominal fee.  Traffic can be a bit congested so I opted for the water taxi and was happy that I did.  This resort also allows you to get away from the “touristy” side of Queenstown.  There are also about 4 or 5 restaurants in the Hilton resort so you won’t go hungry.

After driving to Queenstown from Mt. Cook, I decided to take the rest of the day off and just relax in the hotel.  After being on the road for almost two weeks, it was time to take a break from sightseeing and just be a “homebody” at the hotel.  As a general rule for myself, I typically try to take a “down” day or half day every three or four days so not to burn myself out on traveling.

The big attraction of the Queenstown area is experiencing Milford Sound which is a scenic fjord within Fjordlands National Park.  It’s the #1 attraction of New Zealand.  To get to Milford Sound, most people do an all day bus tour which is comprised of an early pick up at your hotel followed by a 4.5 hour drive to Milford Sound, 2 hour cruise through Milford Sound, then a 4.5 hour drive back to Queenstown.  That experience will cost you about $125.  For me, this did not sound enticing so after some research, I found that there are charter flights to Milford Sound from Queenstown which gets you there in 40 minutes, followed by a 2 hour cruise, then a 40 minute flight back.  The cost was $365 I was picked up at my hotel at 8:45 am and was back to my hotel by 1:30 pm.  I flew with Air Milford and was glad I did.  The whole experience was seamless and the flight itself was the best part of the trip for me.  On the way back from Milford Sound, I got to sit in the cockpit with the pilot which I’d never done before. #AirMilford

By taking the charter flight, you take a small aircraft and fly through the Southern Alps. The scenery is breathtaking especially as you fly through Milford Sound and come in for a landing.  It feels like you’re flying right next to the mountains… you’re so close. 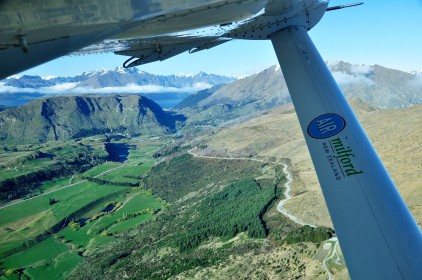 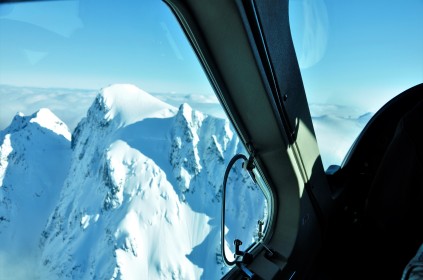 After a short walk from the landing strip, we arrived at the dock and boarded our boat for the two hour cruise through Milford Sound.  The weather can change quickly in Milford Sound and you should dress warmly.  And when the captain says he’s going to pull under a waterfall, believe him… don’t stand on the bow of the boat when he says this. 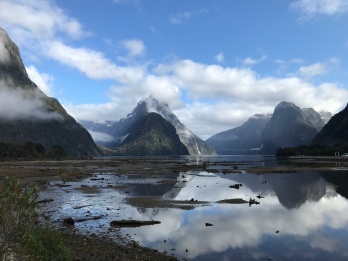 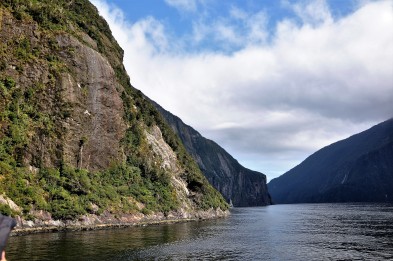 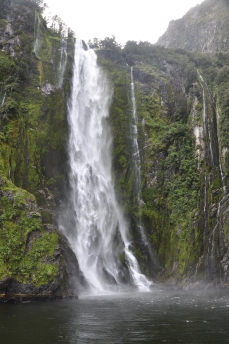 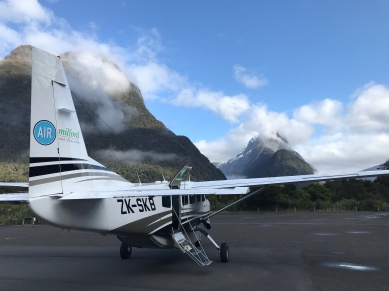 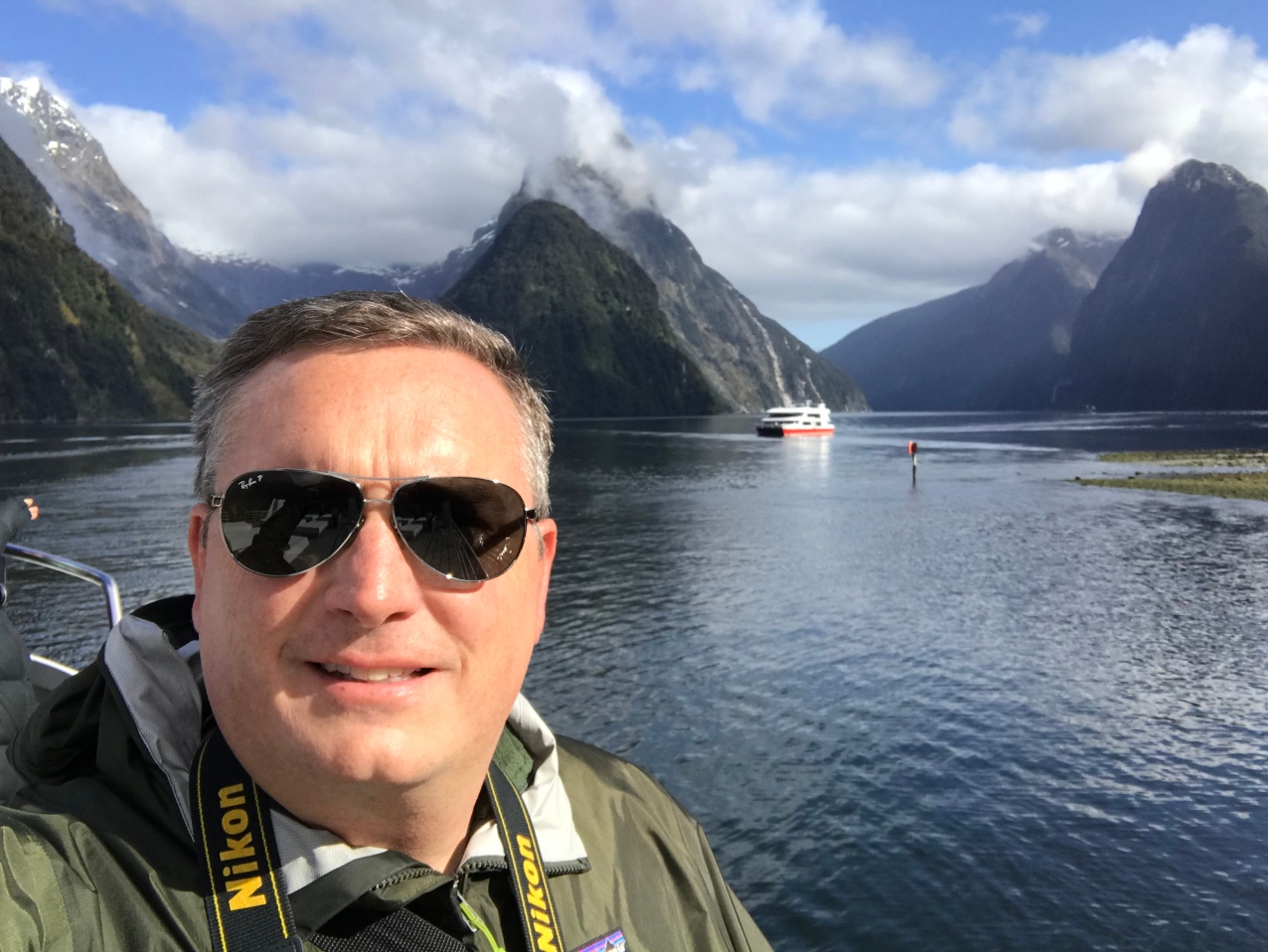 The flight back was just as great.  I included a video of the takeoff through Milford Sound.  It’s a bit bumpy…

When you sit co-pilot, it’s amazing how your camera captures the propeller.  Also make sure your body steers clear of all the buttons. 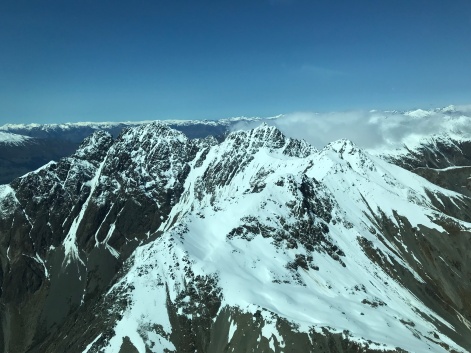 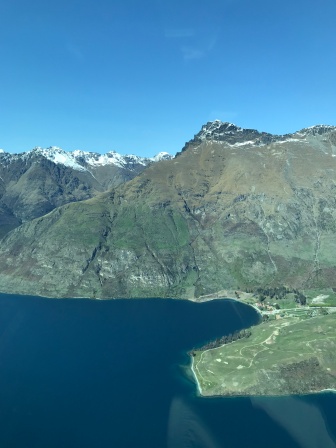 Queenstown itself is the place to book any type of adventure you can dream of… be it bungee jumping, white water rafting, hot air balloon ride, skiing, or whatever you want.  Queenstown is very touristy and very young (my age is showing).  I had been warned it was a little like “Gatlinburg” which I can see and I would also add the Cancun similarity where every activity or daytrip is being sold to you.  Queenstown has some great restaurants and I would recommend Winnie’s Pizza for a great pizza.  They served Monteith beer as well which was quite good.  I was a bit disappointed in the New Zealand made art selections in Queenstown but did stumble upon one store that offered a good selection of New Zealand made art called Silver Leaf gallery. 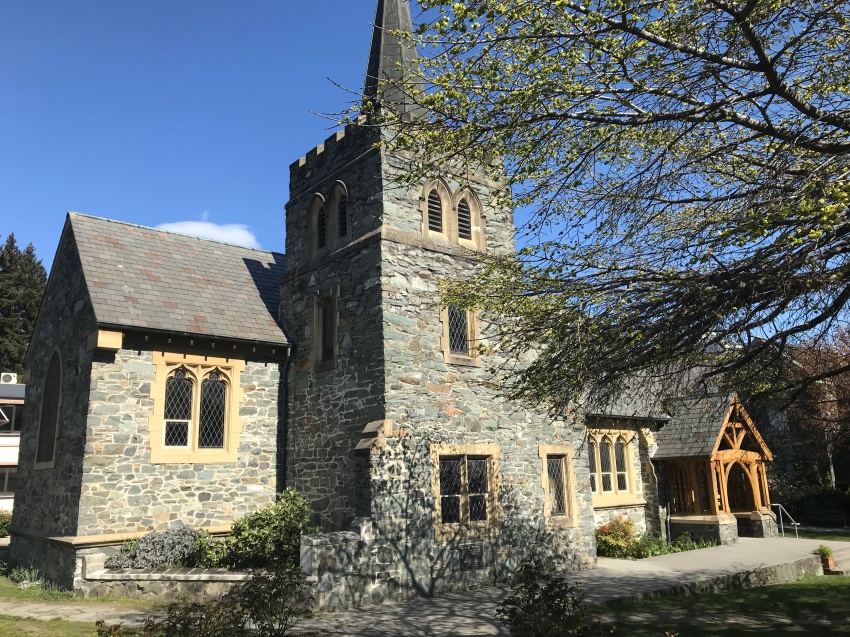 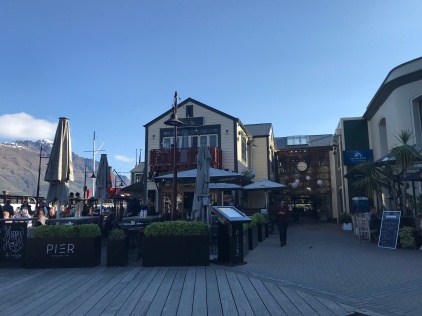 Queenstown also has its own gardens which is a nice break from the “touristy” side of Queenstown.  By no means are the gardens comparable to other botanical gardens but it was a nice place for a stroll, picnicking, or lawn bowling. 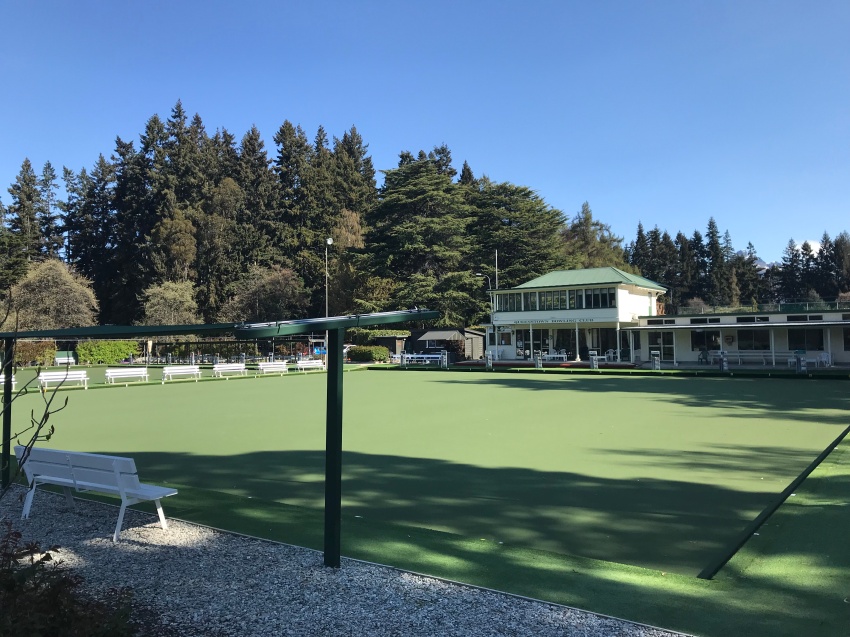 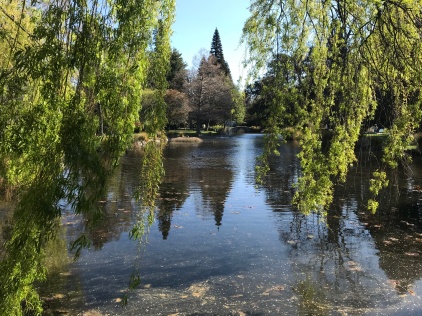 There are many small towns around Queenstown to visit.  Upon a recommendation, I drove out to Lake Wanaka which is where parts of Lord of the Rings was filmed.  On the way there (about an hour from QT), you have to maneuver through many switchbacks to get over the mountains so be ready for some high altitude driving.  Lake Wanaka has “that Wanaka tree” that people like to take a picture of it.  It’s quite small but easy to find just off the main parking lot (to the left) of Lake Wanaka nearest to town.  The town itself seems a bit newer and has many adventure based shops and restaurants.

The small historical town of Arrowtown is not to be missed and is very close to Queenstown.  Although a bit touristy, there’s a good mix of shops, history, and restaurants to explore.  With all of the restaurant options, I settled on the Stables Cafe and Restaurant which is right next to Buckingham gardens where you can watch the schoolchildren do all kinds of flips off a raised ledge.  The burger at the restaurant was great and don’t forget to get some ice cream at Patagonia Chocolates.

On my last day before flying back to Sydney, I decided to take a short drive to The Remarkables ski resort.  For some reason, I thought I’d just be driving to some viewpoint and that’d be it… not so much.  The access road to The Remarkables was a quick drive from the hotel and from there the adventure really began.  I am not a huge fan of heights but have driven many narrow roads with switchbacks; however, this road didn’t always have guard rails and was just wide enough for two cars.  Half way up was paved and the other half was gravel.  The scenery was “remarkable” but you had to keep your eyes on the road or else.  As I continued up the multiple switchbacks, I could finally see the ski lodge and it was quite busy.  I could be wrong but I think this ski resort was the final resort to still be open after the winter season.  Ski culture is awesome and so I walked up to the lodge and had lunch and watched some skiers come down the mountain.  If you’re not comfortable with heights or roads without guard rails, I would not recommend this drive for you. 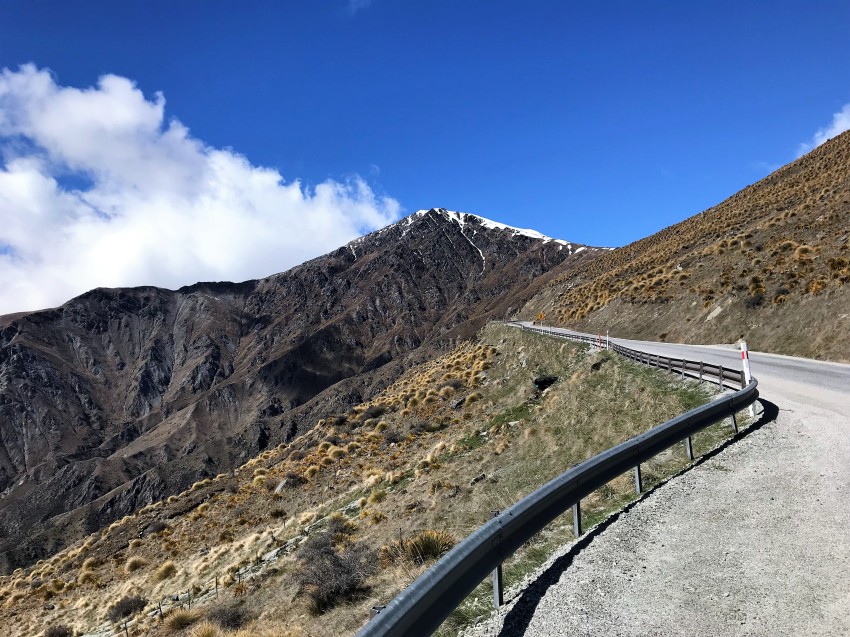 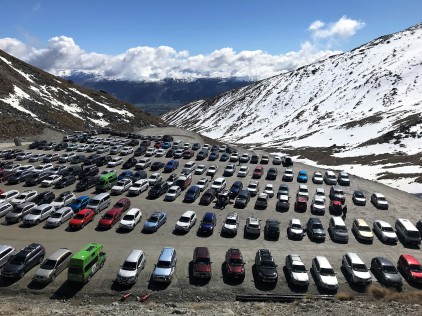 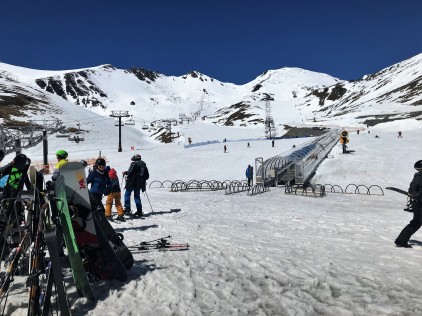 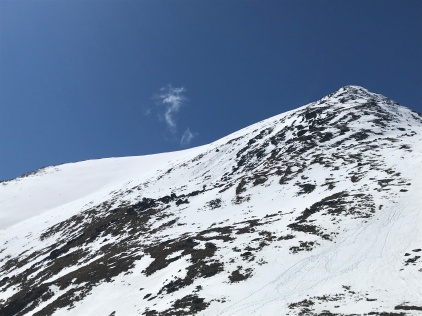 The trip has come to an end

After being away for almost 2.5 weeks, my trip came to an end in Queenstown and I flew back to Sydney later that day to catch a flight the next morning back to home.  I had a phenomenal time on this journey and was in awe of the scenery, culture, and great weather.  I was really blessed with sunny skies almost every day and just a little bit of rain.  I had visited the North Island of NZ back in 2005 and had always been told the South Island was much better.  I certainly enjoyed the South Island but I think I enjoyed the North Island equally.  Both islands have so much to offer that are different.  There’s still so much to cover of NZ but I think I have a great appreciation for what NZ has to offer.  I would highly recommend visiting and take the plunge and rent a car to experience driving on the “other side” to have the freedom to go where your interest lies.
Travel tip:  If you fly back to Sydney for your return flight back to the USA, I would highly recommend Rydges Hotel.  It’s reasonably priced, has a great breakfast buffet, and is walking distance to the international terminal (no more than 10 minutes).  The rooms are quite comfortable as well.